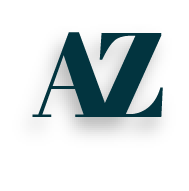 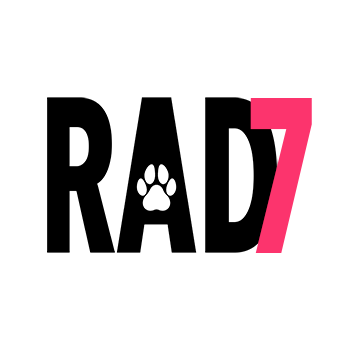 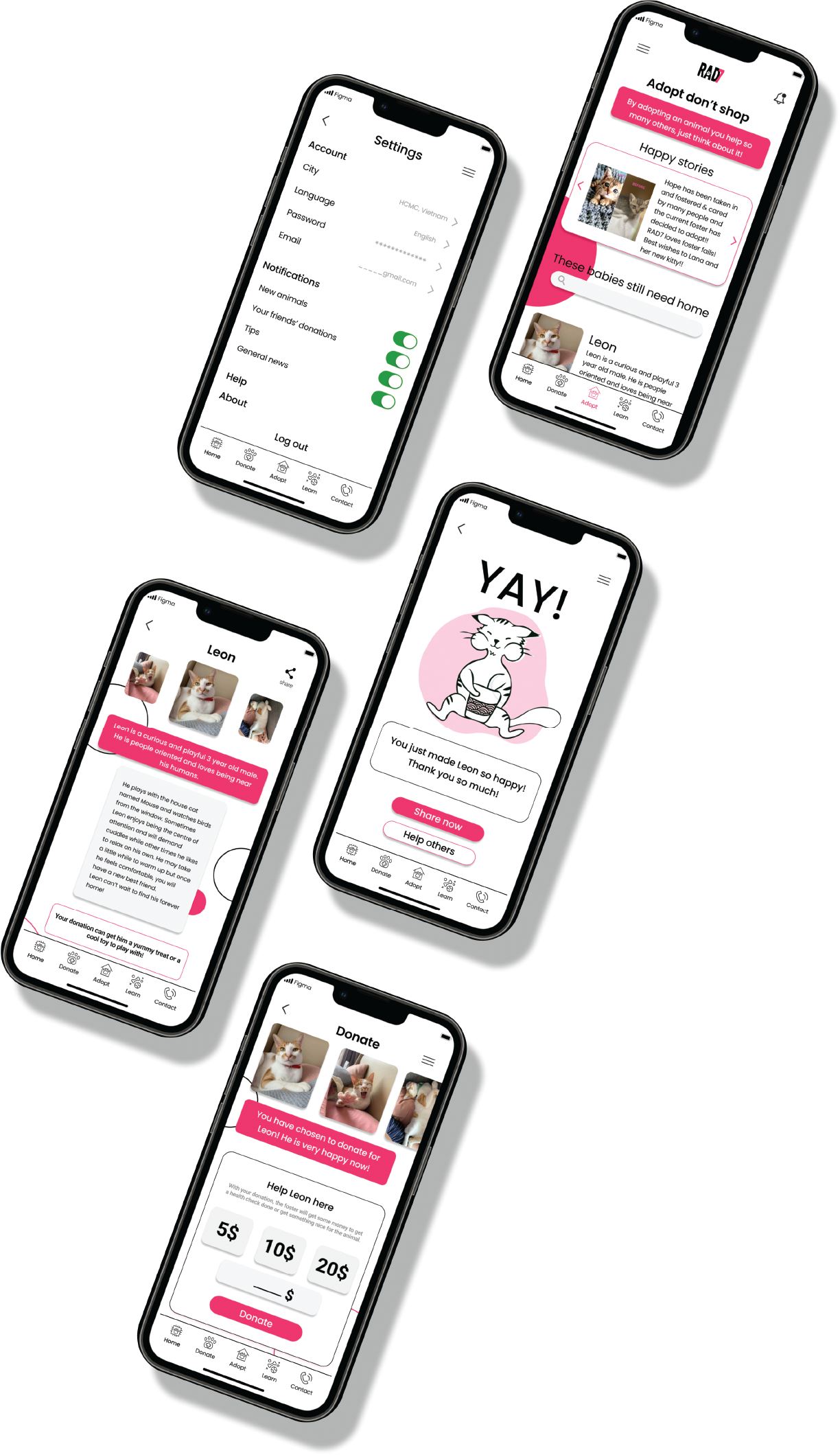 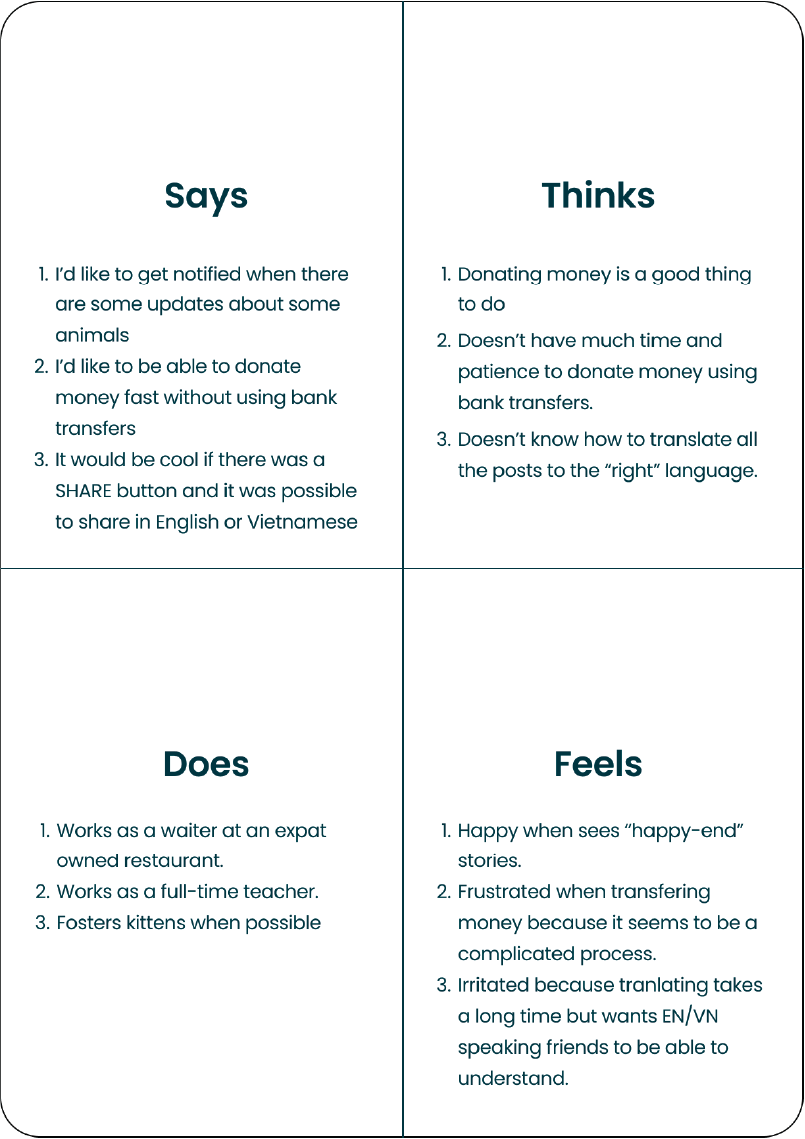 Pain points
Mapping Minh's user journey revealed how helpful it would be for users to have access to a dedicated RAD7 app.

User journey map
Problem statement: Minh is a busy waiter who needs a new, faster way of sharing information about animals because he doesn't have enough time to make his own posts in 2 languages each time he sees an animal that needs to be rescued 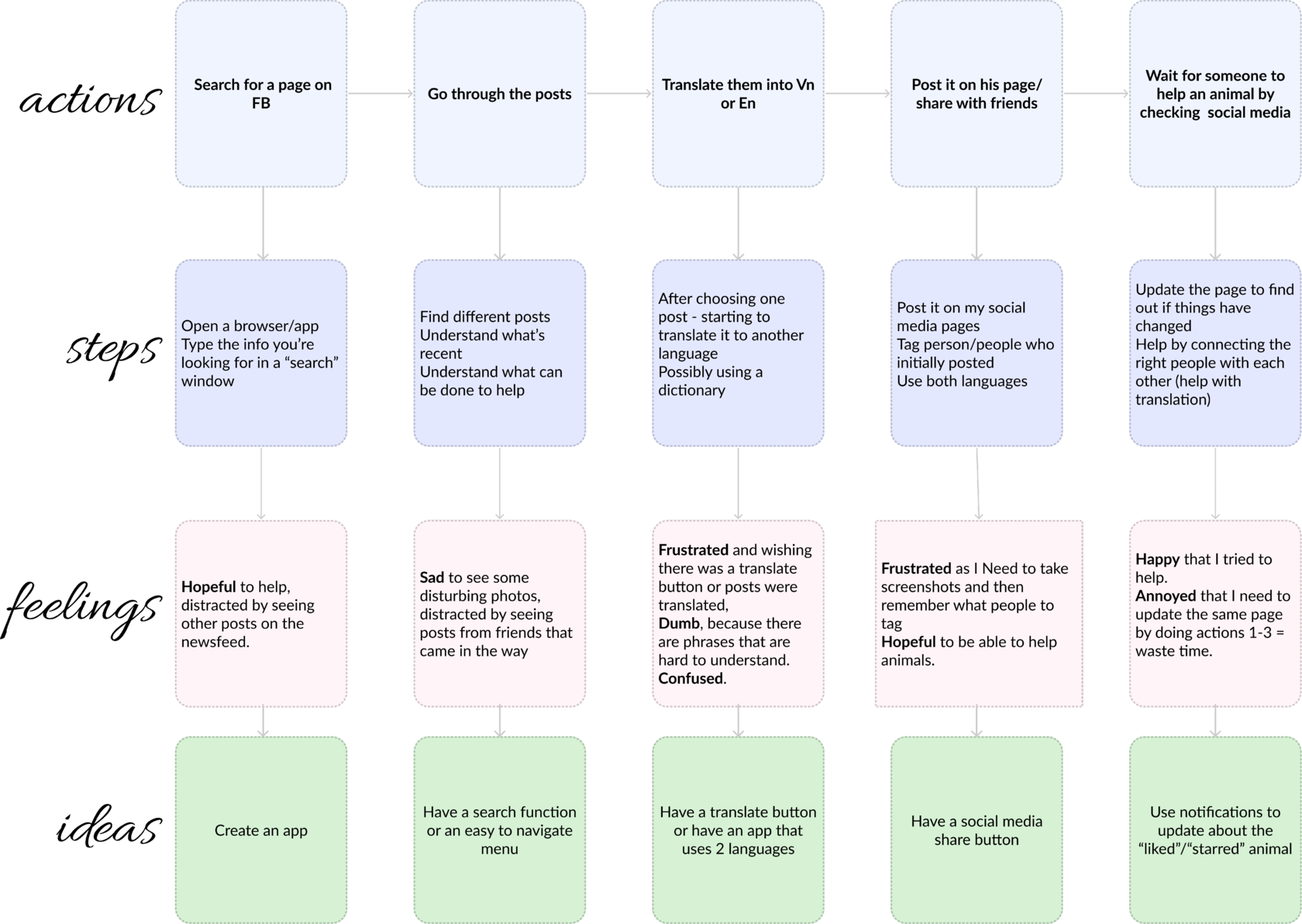 I created a user persona to put a face on RAD7's target user and visualize various aspects of their behavior and motivations. This persona was roughly based on the users interviewed during the usability testing.

Persona of a typical RAD7 follower
I looked at RAD7 competitors, noting which design worked best. The goal was to compare the user experience of similar organizations' websites. 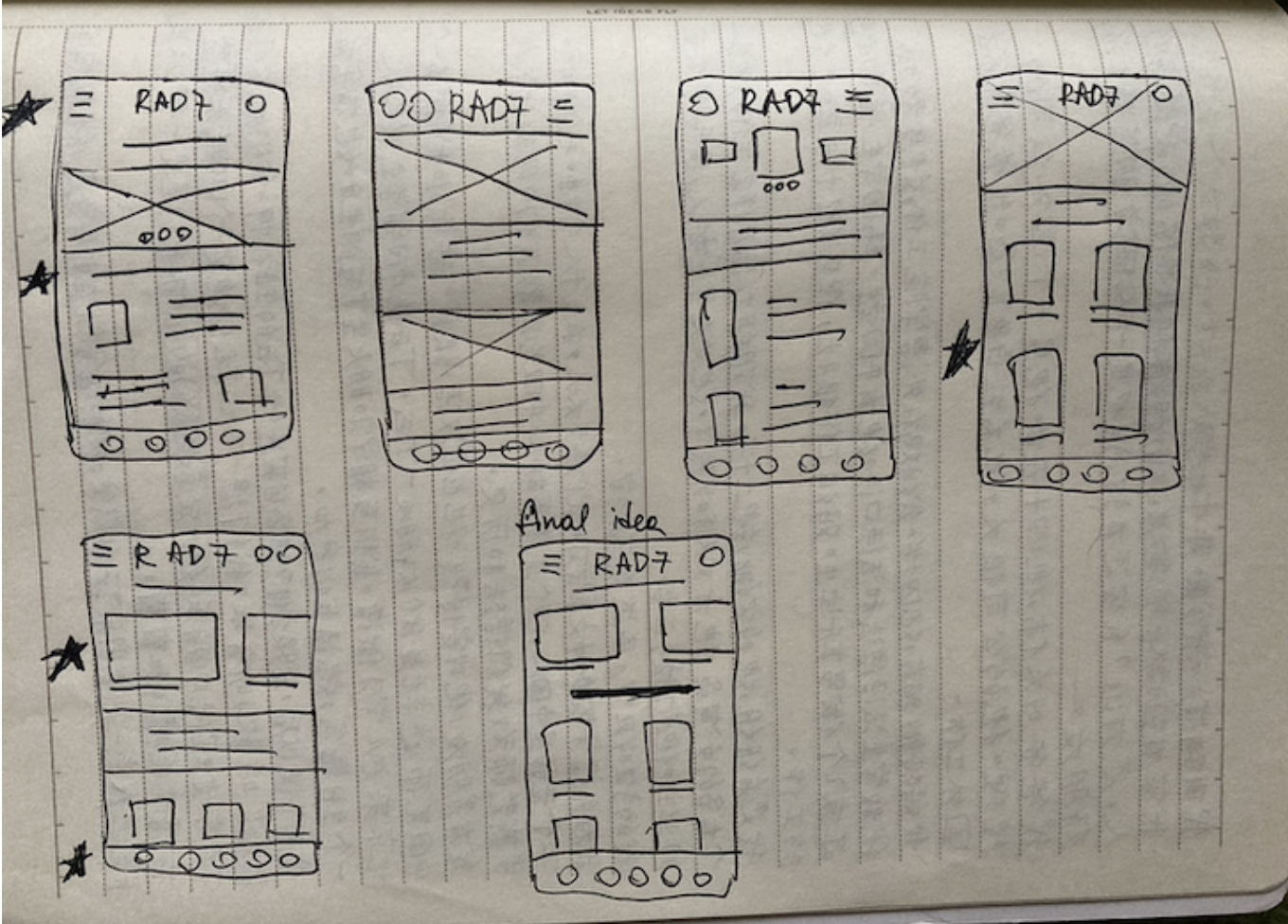 As the initial design phase continued, I made sure to base screen designs on feedback and findings from the user research. 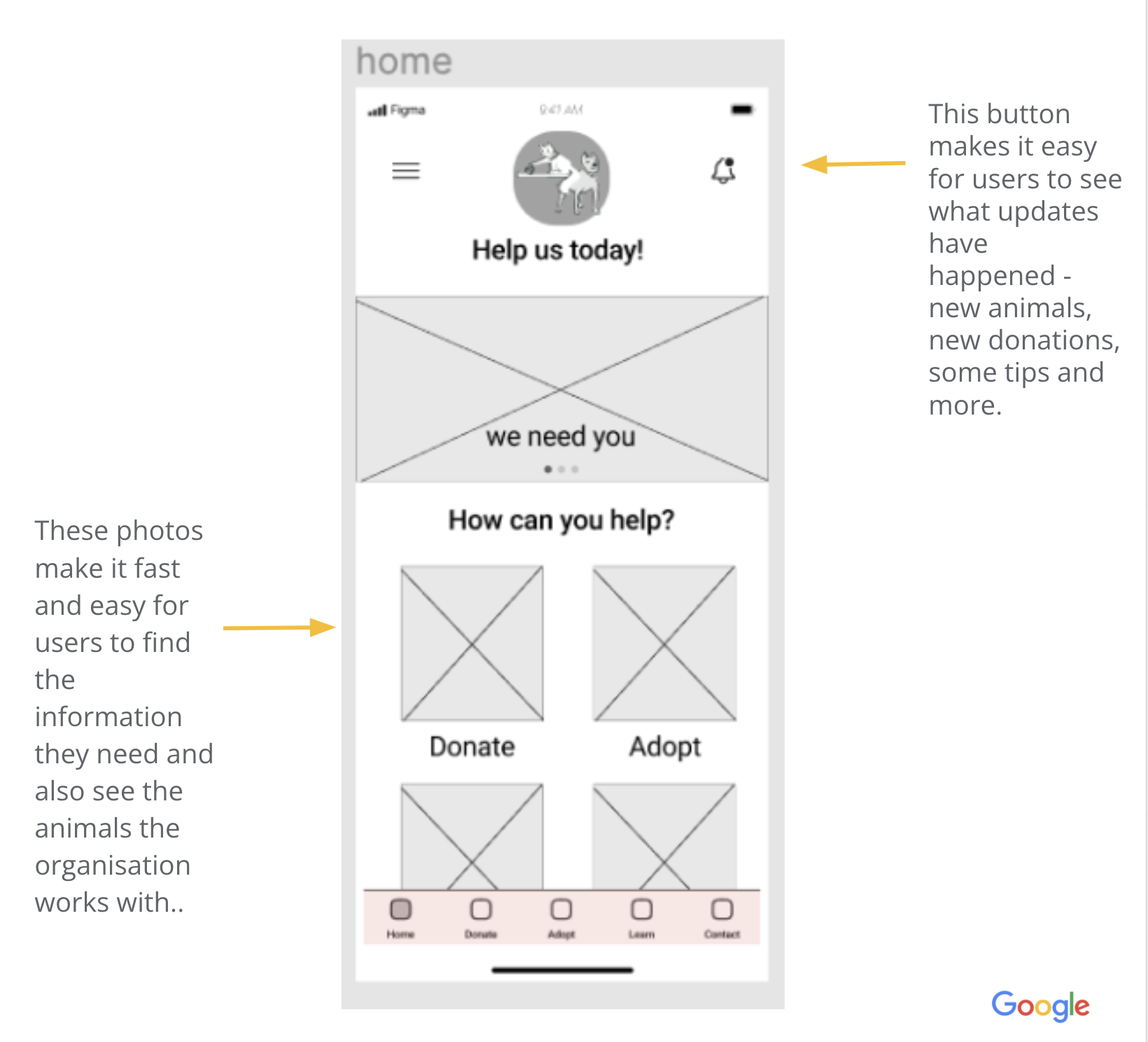 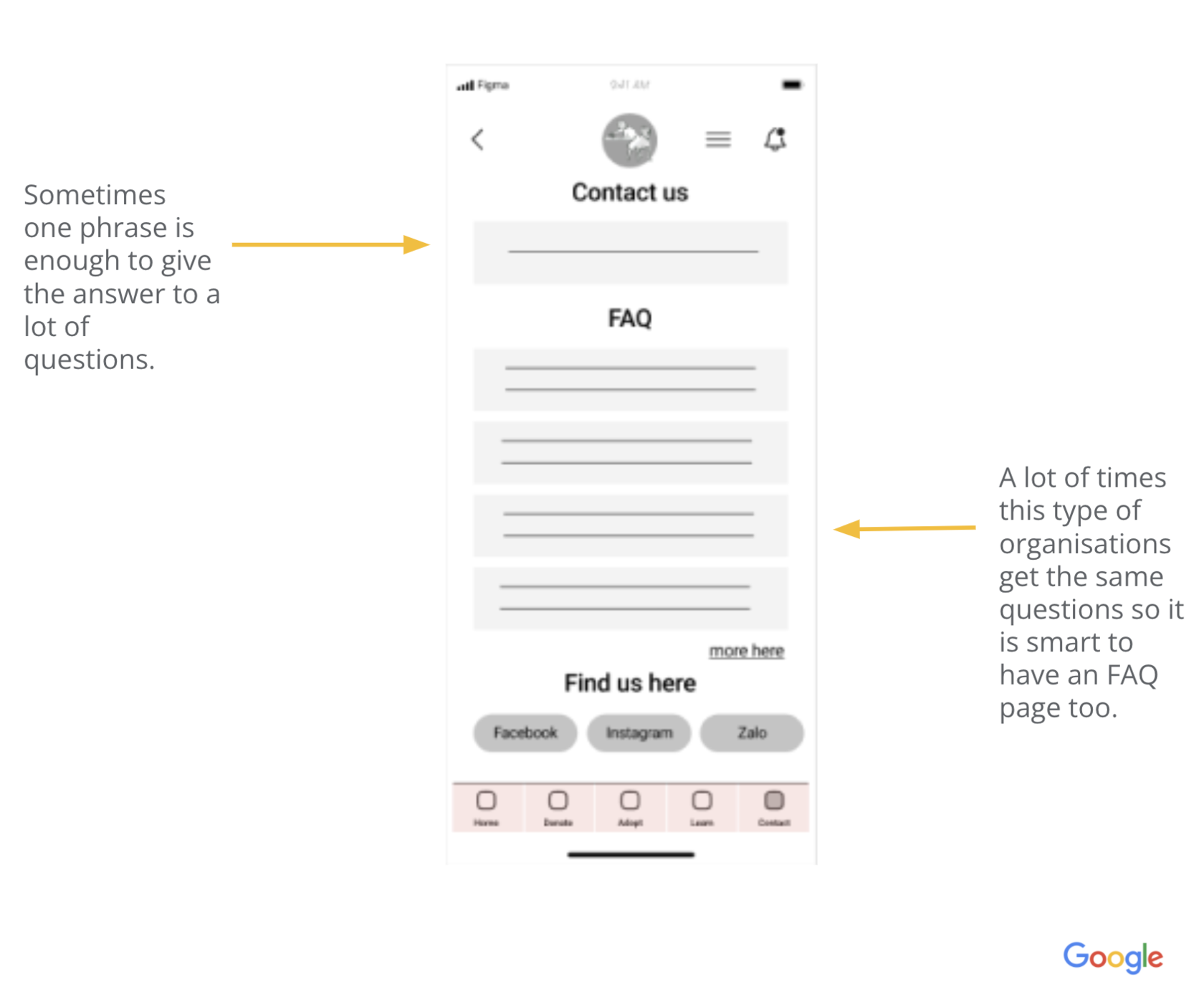 One page that might give users a lot of answers in a short period of time without a need of contacting the organisation.
To test the app's user experience, I conducted 2 rounds of usability studies with a few animal lovers and asked them to perform a few predefined tasks in the app as I recorded their actions and took notes. The tasks were: 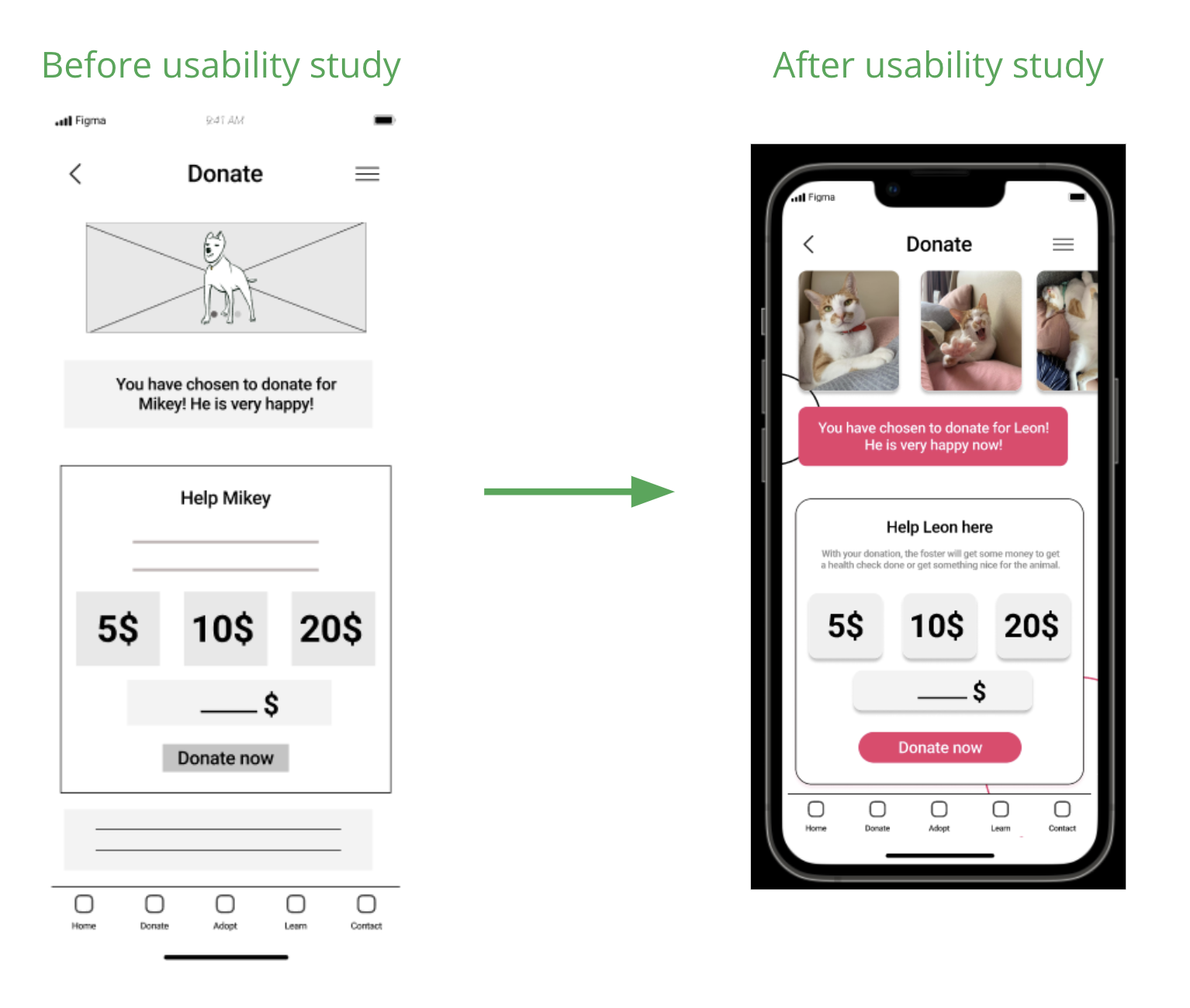 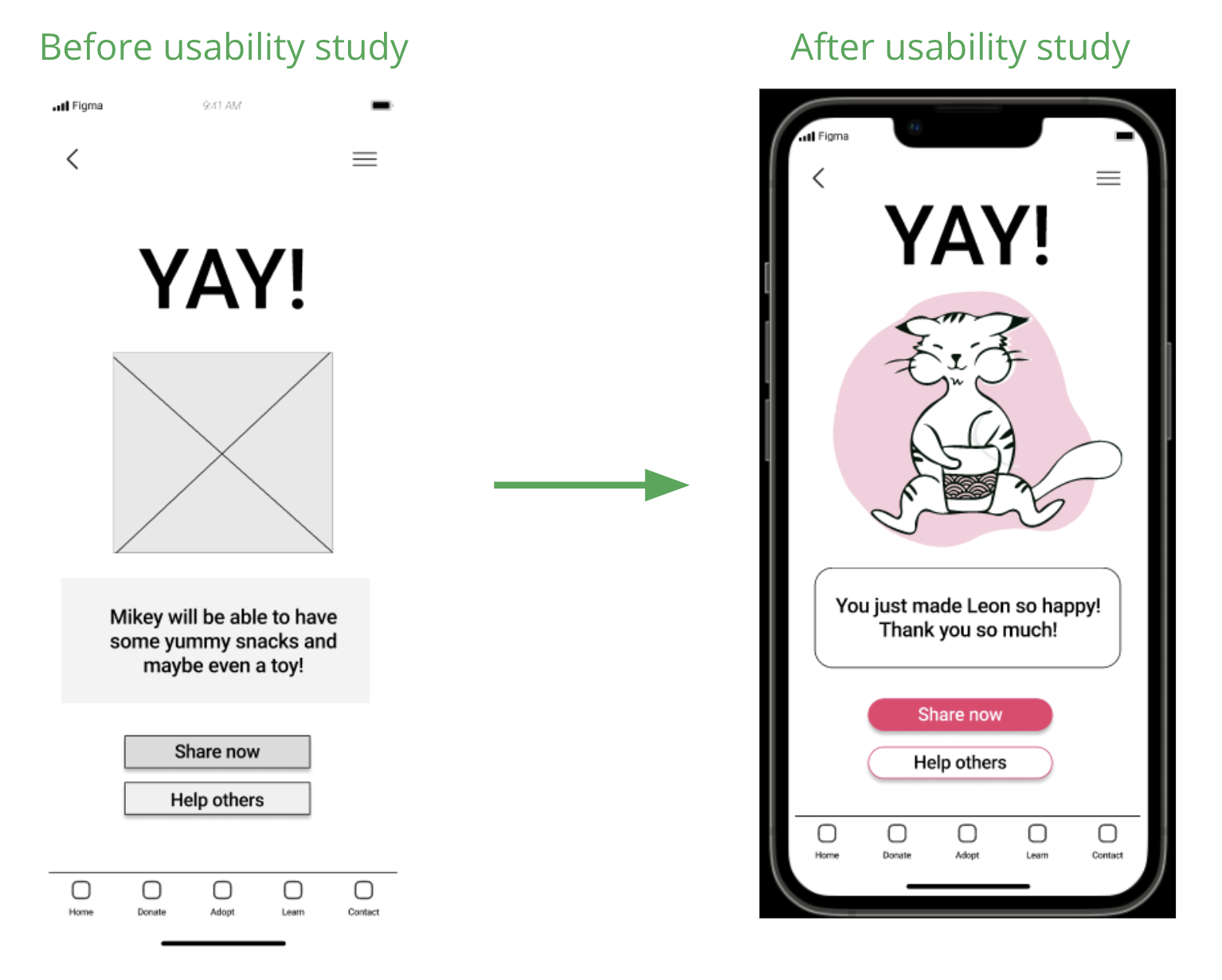 I used the colors from that existing logo which are white, pink and black. 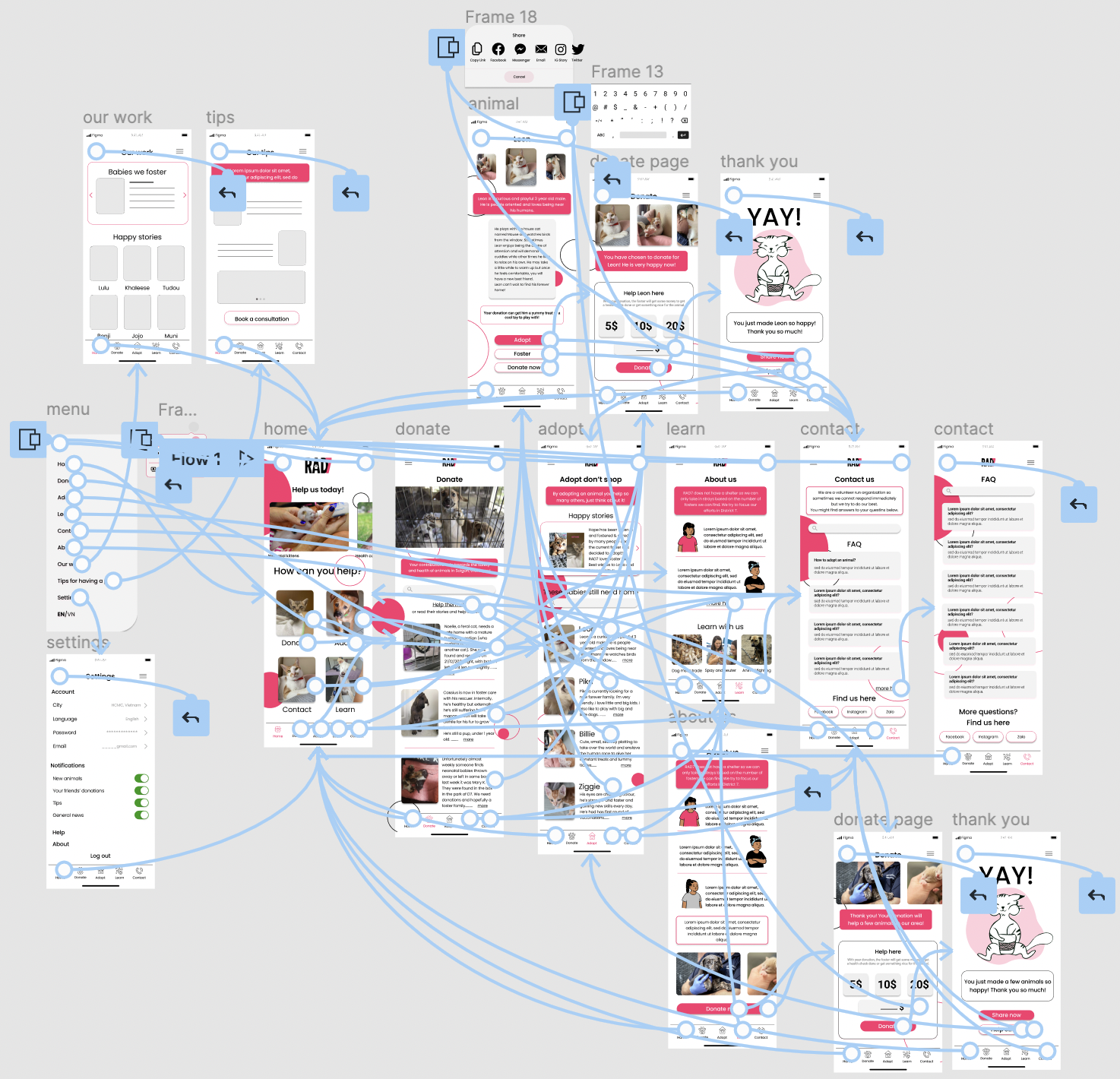 I added extra photos so when people would want to donate money, they would be able to see more photos of the animal or its situation they are going to send the money for. It develops more trust.
Mockups
The app makes users feel like RAD7 really thinks about how to meet their needs.

One quote from peer feedback:
"The app made it so easy to find any useful information as well as to donate money and share the info about some rescue animals."
This project was exciting because it was my first project and I was working on something I enjoyed, but it also made me feel quite nervous because I knew it was a lot of work. While designing the RAD7 app, I learned that the first ideas for the app are only the beginning of the process and usability studies and peer feedback influenced each iteration of this app's designs. I also learned that research is very important when creating different designs..
Next steps
Conduct another round of usability studies to validate whether the pain points users experienced have been effectively addressed.
Conduct more user research to determine any new areas of need.
Thank you!
Thank you for your time reviewing my work on the RAD7 app! If you'd like to see more or get in touch, my contact information is provided below.

What to look out for?
● Some of the features that i noticed is that some of the websites don't feel complete
● Some are missing stories / faces - who stands behind it, where they are, etc.
● Some websites are not very intuitive.
Findings from the first study helped guide the designs from wireframes to mockups. The second study used a high-fidelity prototype and revealed that 5/5 users found it easy to use.

Before committing to high-fidelity designs, I drew out alternative solutions for the primary screens on paper. Instead of focusing on design intricacies, I was able to prototype several layouts. Taking the time to draft iterations of each screen of the app on paper ensured that the elements that made it to digital wireframes would be well-suited to address user pain points. For the home screen, I prioritized an easy way to find all the information from the homepage to help users save time.


Paper wireframes
Some opportunities for my app include:
● Offer a wide range of features such as donate, adoption files, educational programs
● Make a website more accessible by having two languages - EN and VN
● Create a straightforward navigation in the header or the footer.
What I learned:
Impact
The final high-fidelity prototype presented cleaner user flows. 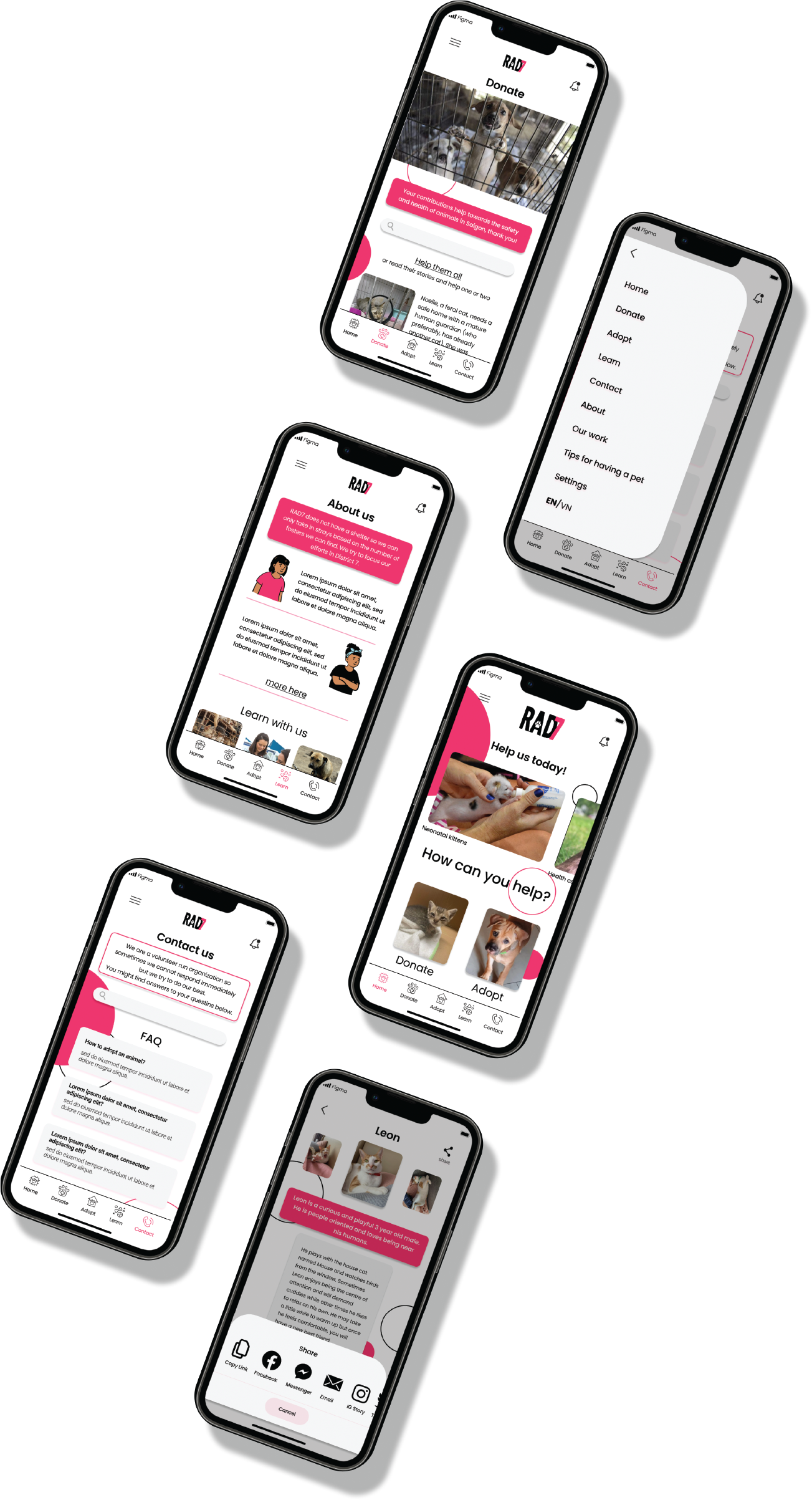 2
1
Icons are there to help make navigation easier

The app will be in 2 languages - English and Vietnamese. 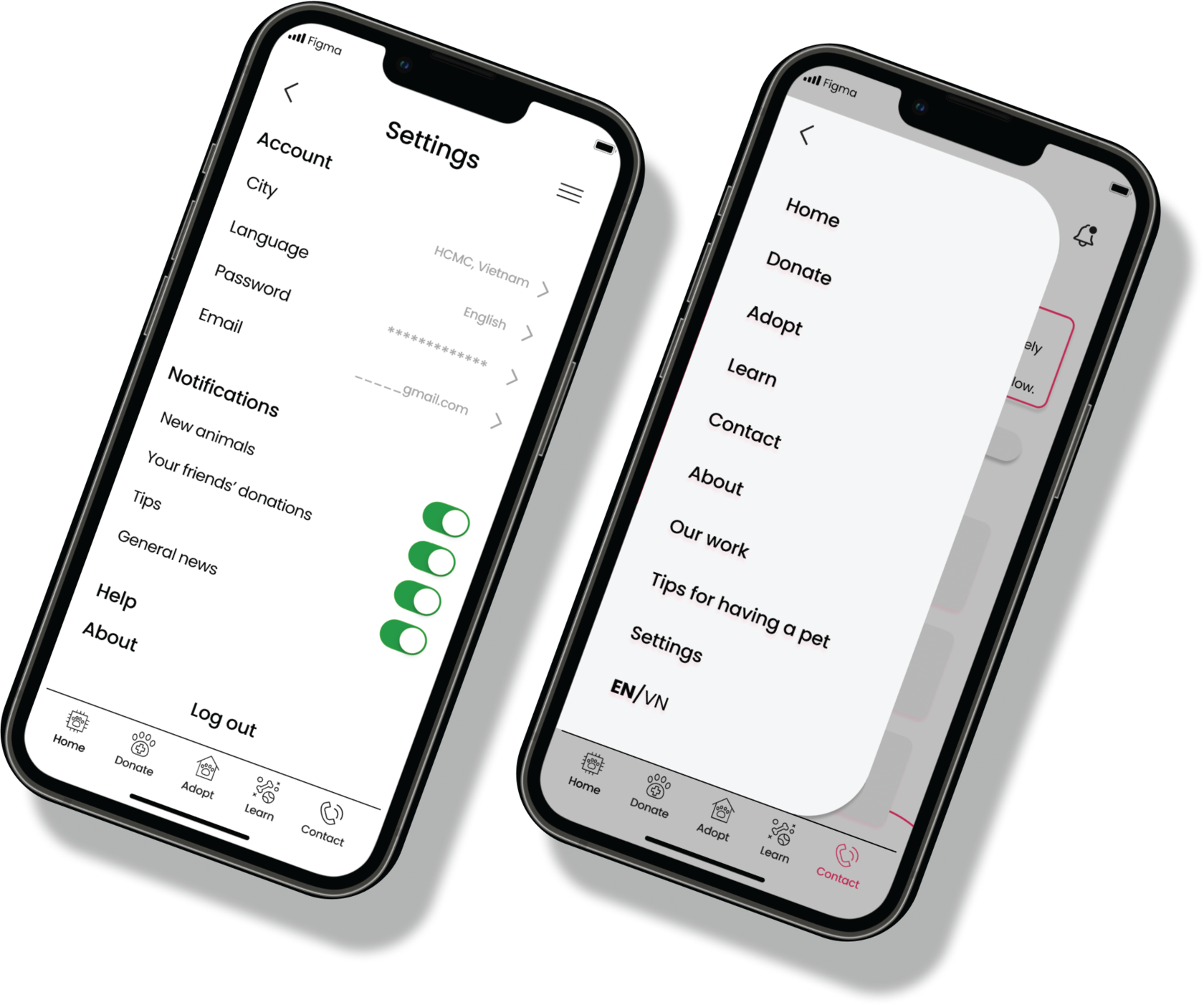 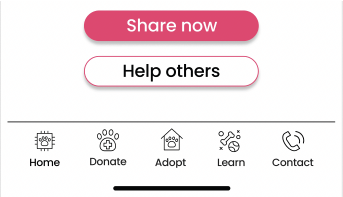 Accessibility considerations
The challenge
To create a mobile app for a charity-run animal rescue organization based on my own user research.
The process
The process was to take full ownership of the various roles involved in designing a product, define who the end-user is and its goals, then plan how the product would function via the user flows as well as conducting usability studies, after that wireframing and mock up phases and iterating on designs.
The goal
A mobile app where users can find all the information they might need on how they can do good and help animals in their area.
User Research: summary
I conducted research and created empathy maps to understand the users I'm designing for and their needs. A primary user group identified through research was working adults who don't have much time and sometimes money to donate and volunteer but they are all animal lovers.

This user group confirmed initial assumptions about RAD7 followers, but research also revealed that time was not the only factor limiting users from sharing the information online. Other user problems included issues with translating from English to Vietnamese and vice versa.

1
Accessibility
Ho Chi Minh City is a city where a lot of people speak English and Vietnamese so the app like this should be in both languages.

2
IA
Navigation bar and everything else should be easy understood by any user.

3
Time
Working adults do not have much time to share and check information about animals.

4
Variety
There are lots of ways to help animals - tips and being educators is one of them. Not everyone has money to donate so a share button can be a great option too.

3
Should be more information in the "learn section"

Other projects
Making Traveling with Pets experience easier for users 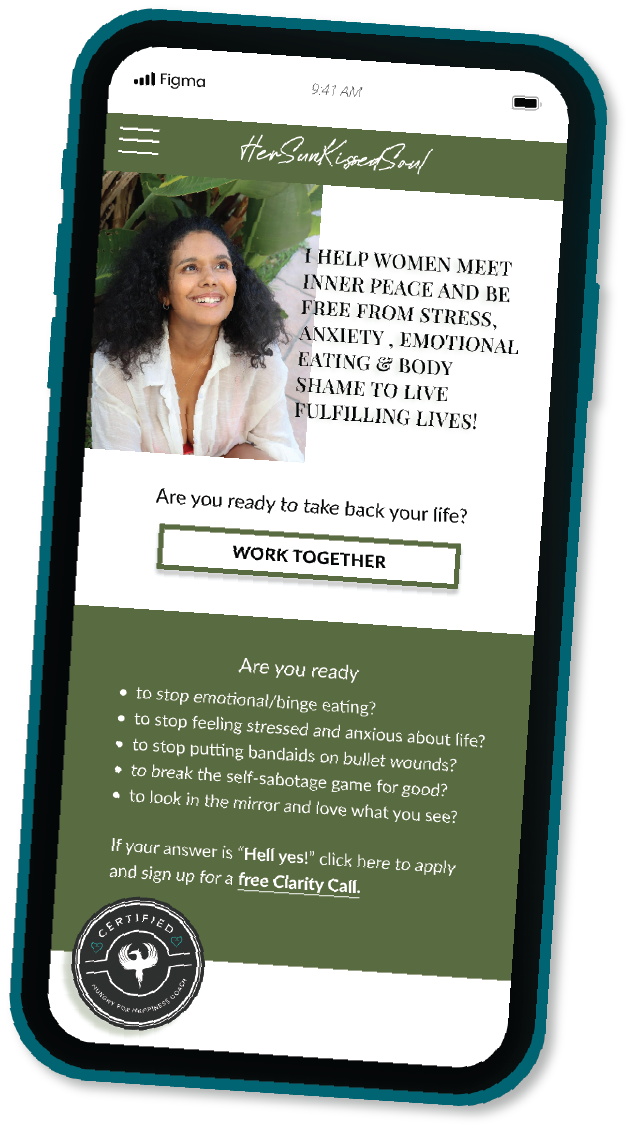 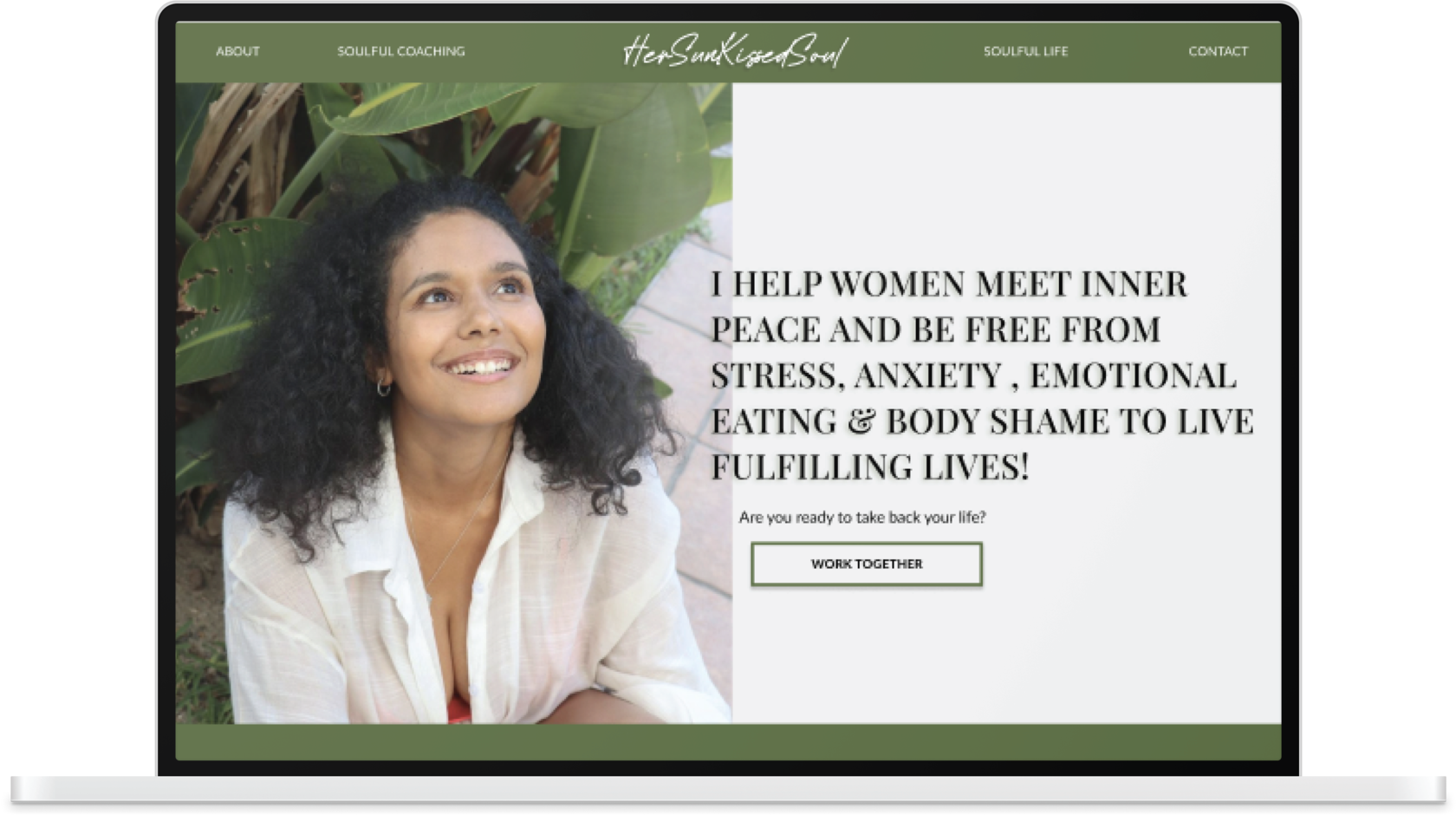